So it’s about time. Today is my last day at SparkPost. It was an amazing almost 4 years at SparkPost. At this point, I’m not sure where I’m going to join next. Initially, I put a notice after getting an offer from a health tech startup but given some communication issue and Istikharah, I just didn’t feel right about it. So I had to pass the offer. However, I’m currently, working with a few opportunities and t almost final stage.

I assume I’ll have some time in between. So I wanted to make a list () a few things that I want to work on during this period.

END_OF_DOCUMENT_TOKEN_TO_BE_REPLACED

During my days when I used to drive to Maryland on Sunday evening to work at SparkPost and return to New York on Thursday after-work (due to Friday work-from-home policy), I faced one problem of discovering mosques around me to perform my prayers in congregation. It was more difficult for the fridays I stayed there. As friday is a work day, I can’t just go and wait long time for friday khutba (sermon) and prayers; I need to plan optimizely to go just in time of khutba and return immediately after prayer aiming to do everything from office-mosque-office in less than an hour.

END_OF_DOCUMENT_TOKEN_TO_BE_REPLACED

This February, I had a chance to make a sudden trip to some parts of Australia. I visited Sydney, Canberra and Melbourne during my visit. I wanted to write a full blog regarding my visit but could never manage time. So just wanted to share some photos.

END_OF_DOCUMENT_TOKEN_TO_BE_REPLACED

recently, i came to a realization that i’m spending too much time on facebook. quite often it happened that, i’m scrolling down and down the newsfeed and felt like nothing interesting coming up. at those times, my muscle memory hits cmd + t (open new tab) and types facebook.com in address bar. so, even without actively realizing i’m re-opening facebook and starts reading from top of the newsfeed. in my realization, this is too much. i must control myself.

i also witnessed a number of social problems upon sharing things or checking-in on facebook. even though there are many “friends”, not everyone is really friend! regardless, people has complications (often unintentional, myself included) about good things (often pure show-off) of others. in addition, i hate to say, i’m pretty tired of seeing tons of selfies (blame to me; not the one who takes).

so, on 1st january (2 hours before 2nd january), i felt like i should really take a long break and today is a good day to act. deactivating account sounds like the right solution in this case. however, i tried that in past and it didn’t work very well as facebook automatically reactivates account upon login. so, by forgetting that i deactivated and due to muscle memories, i open facebook.com, login and everything back to normal. they made it too easy! i decided to force myself; and deleting account seemed only viable option.

without further thought (i know, if i start rationalize, i won’t be able to force myself), i decided to permanently delete facebook account. they didn’t make this one easy; so i had to google to find out how to do it.

tl;dr: it’s much harder than i thought.

to make things clear, i never blame facebook for anything. it’s really good and that’s why it’s making harder everyday to live without.

So, nailed another hackathon at SparkPost. Last month we had our winter hackathon and my team YACC Shavers, won in Partner Integration category. This is fourth consecutive winning of my team (not same members) and 3rd at SparkPost.

During this hackathon, we built an Alexa Skill that will integrate with your SparkPost account and you can ask it questions like

at somewhere…in we used to use all lowercase typing. it was really fun. you can just keep tying without worrying about changing case. also for some reason, it hurts my eyes and brain less to read something in all lowercase. that’s probably because i like that.

so, from today i decided to go all lowercase with my blog. it’s important to note, i can just add css to show everything lowercase using css’s text-transform. but it’s not about showing, it’s about writing. so i’ll write them in all lower. however, not sure about the old posts. i may update them occasionally or using programming tricks.

This is the 3rd consecutive winning in internal hackathon events. Last two were in SparkPost, where I currently work. 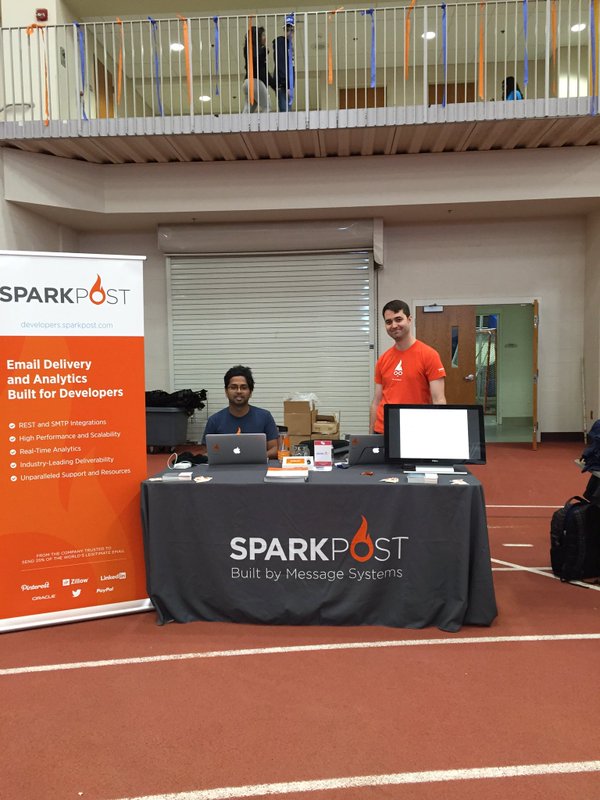 I’ve reserved this tour about a year ago. I always have a fascination for visiting giant factory like facilities. I think I’ve got this when I witnessed my father as a chief contractor for a giant textile mills in Pagla, Narayanganj.

Initially I planned to visit this with my family until, at very late, I came to know that visitor must be at least 6 years old. My daughter is about 5 years early for that :P, hence my wife couldn’t go too. So, I invited 3 of my other friends and among them 2 could make it in this short notice.

We started on 15th’s very early morning even before we saw the sunlight. It’s more than 6 hours of drive from Brooklyn. We reached there about 30 minutes ahead of scheduled time.

The area closed to the facility is so beautiful. The roads are so clean and solid and natures are really soothing. From the outside we could tell how giant this facility is. Though there were a few signs posted about tour guests parking, it was difficult to locate exact place as several roads were closed and there were no detour signs. So we had to make several back and forth before we found a staff and ask for assistance who removed one of the blocker to the  way to actual tourist parking lot.

When we entered the facility we’ve been welcomed by a few of organizers and we were given badges. Then they took us a to classroom where they’ve given us instructions how the tour will be conducted and also gave us wireless headphones. This was extremely helpful as the whole place is too noisy and we could barely hear anything unless we put the headphone on. The noise basically coming from conveyer belts that were throughout the facility.

Then we’ve taken to different areas of the facility including the inbound area where they process all incoming shipments from FBA sellers, MODs where they store all items in smaller quantity, packing area, labeling and sorting area etc.

I remember, when I saw a packer was very quickly taking boxes for putting items in it I wondered whether he decides those himself that fast or the software tells what size of box required. It’s actually the later. As soon he starts processing order, required size of shipping box is displayed on the screen. Technology is amazing, isn’t it?

Then we’ve been taken to the places where shipping labels are affixed. I thought it’s a manually process until I saw it. After a box is kept on the belt, a shipping label is automatically attached at a later step (identified by order barcode that’s affixed by the packer). However, we saw this process is very error prone and there were 2-3 people who fixes those things manually.

It was very clear that lots of technological magics happen there at all times. However, the importance of manual labor is nevertheless. I was really amazed to see the size of the facility. They also mentioned the combined size of 3 floors is equivalent to 28 football fields.

However, during my short stay there, I’ve got an impression that work condition may be very hard there! I tried to pay attention to a number of people and they looked tired and seemed unhappy. Pardon my judgements if I’m wrong (and I’ll be happy to be wrong here) but I found it aligned when I saw at least two people were sleeping in their car at parking lot. I found only one person, other than the organizers, gave us a positive vibe by giving us smile though many of them noticed us. It may also mean they were very busy and/or their job needs undivided attention! To get a better understand on this, I asked the tour guide how often the workers are allowed to take rest. She replied it’s only twice in their 10 hours shift including their cafeteria time (lunch/dinner/breakfast)! Thanks my load; my job is much easier. Coincidentally it reminded me an article that I read recently about how Amazon pushes its engineers beyond their boundaries.

The tour ended with thank you gift that included a 8oz bottle of water and a mini USB car charger, which interestingly I didn’t find on amazon.com.

Very sadly, we were not allowed to take pictures that actually lost 50% value of the tour, though I respect the fact that it’s their own facility and they have rights to impose any policies. But how something can be a tour if you can’t take a photos?

Overall, unlike my friends, I somewhat enjoyed my tour. I believe the tour can be better in several way including reducing the number of people in each tour so that people can take a closer look. I also want to thank you Amazon to let us visit their facility.

I, however, do not suggest anyone else to take such a long drive for the tour. It’s definitely not worthy. Visit a nearby facility.

Just a while ago, I became Certified Scrum Master (CSM). I’ve taken the course conducted by Pete Demer on January 27-28, 2015 in Dhaka, Bangladesh and attended the exam tonight.